Disclaimer: the demos on this page use WebGL features that aren’t available on some mobile devices.

A couple of weeks ago I tweeted a video of a toy graphics project (below). It’s not done, but a lot of people liked it which was surprising and fun! A few people asked how it works, so that’s what this post is about. 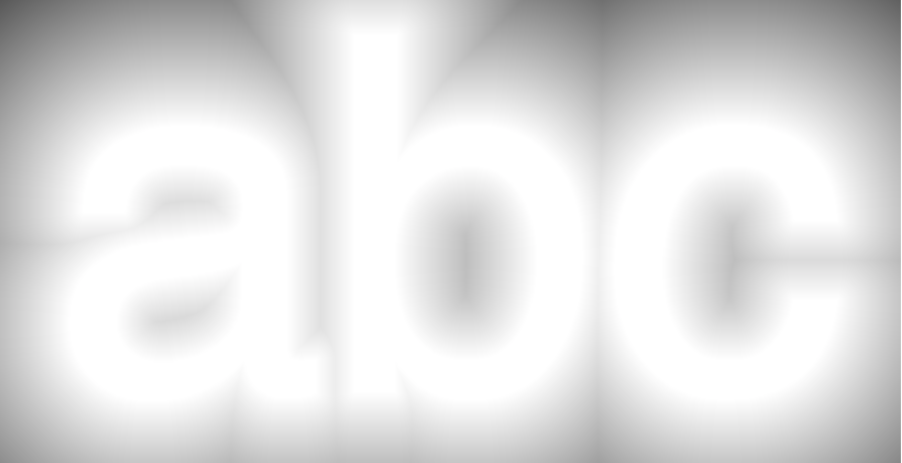 When the demo starts up, it draws some text on a 2D canvas and generates a distance field of it. It uses a library I wrote that generates distance fields really quickly. If you’re curious how the library works, I wrote about that here.

Our lighting scheme works like this: when processing a particular pixel we consider a ray from it to the light, like so… 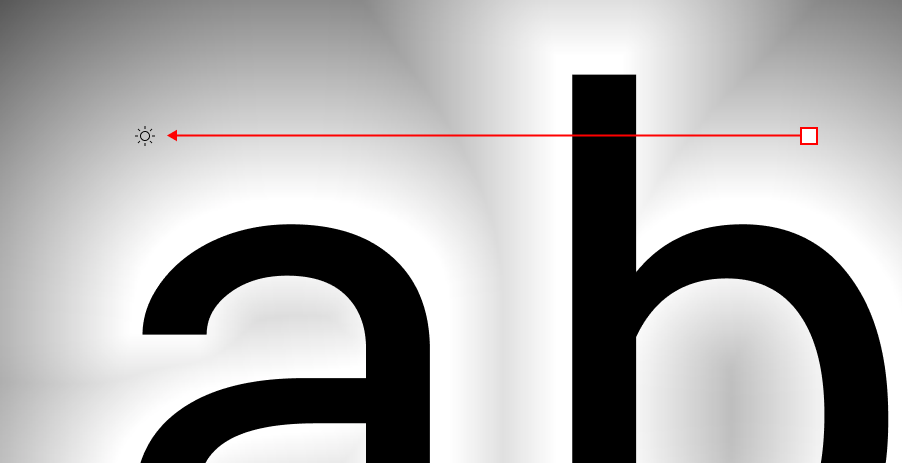 If the ray intersects a glyph, the pixel we’re shading must be in shadow because there’s something between it and the light.

The simplest way to check this would be to move along the ray in 1px increments, starting from the pixel we’re shading and ending at the light, repeatedly asking the distance field if we’re distance 0 from a shape. This would work, but it’d be really slow.

We could pick some specific length like 30px and move in increments of that size, but then we risk jumping over glyphs that are smaller than 30px. We might think we’re not in shadow when we should be.

Ray marching’s core idea is this: the distance field tells you how far you are from the closest glyph. You can safely advance along your ray by that distance without skipping over any glyphs.

Let’s walk through an example. We start as pictured above and ask the distance field how far we are from any glyph. Turns out in this case that the answer is 95px (pictured left). This means that we can move 95px along our ray without skipping over anything! 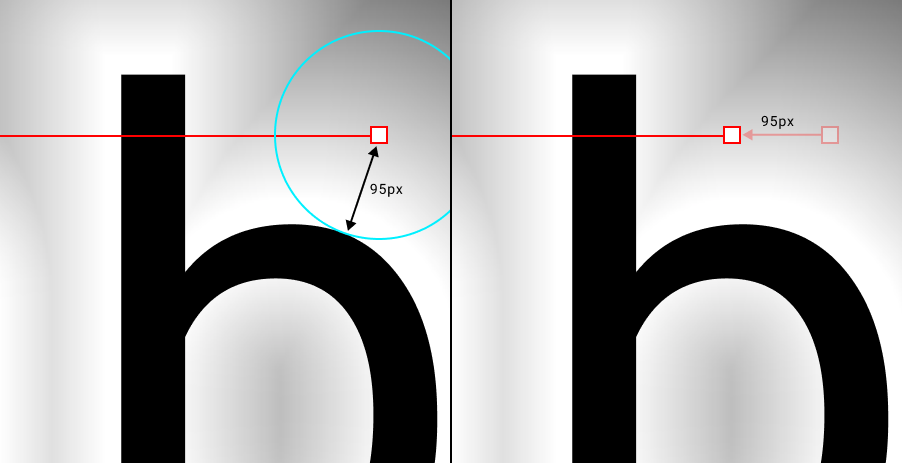 Below is a demo that shows the ray marching steps for a given pixel. The red box is the pixel we’re shading, and each circle along the ray represents a ray marching step and the distance from the scene at that step.

Try dragging the light and the pixel around to build an intuition for it.

Below is GLSL to implement this technique. It assumes you’ve defined a function getDistance that samples the distance field.

It turns out that some pixels are really expensive to process. So in practice we use a for-loop instead of a while loop – that way we bail out if we’ve done too many steps. A common “slow case” in ray marching is when a ray is parallel to the edge of a shape in the scene…

The approach I’ve described so far will get you a scene that looks like the one below.

It’s cool, but the shadows are sharp which doesn’t look very good. The shadows in the demo look more like this… 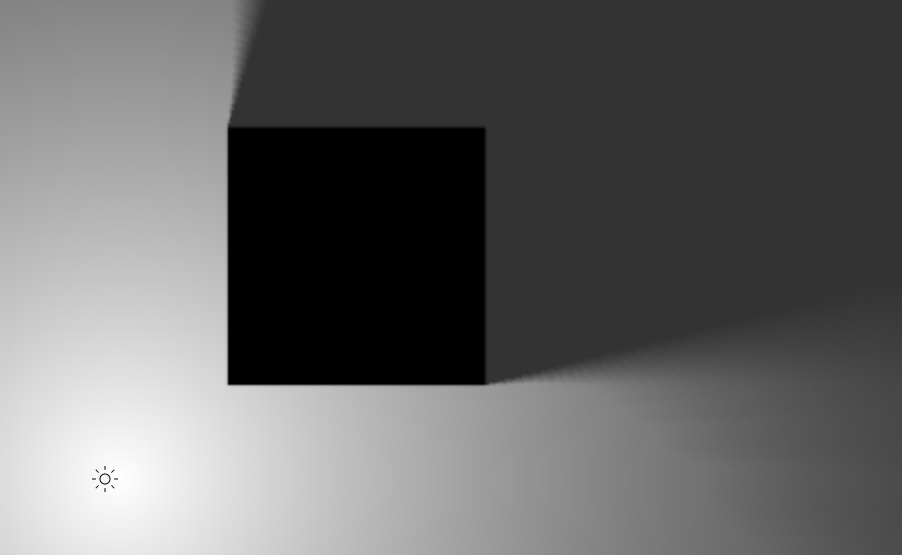 One big disclaimer is that they’re not physically realistic! Real shadows look like hard shadows where the edges have been fuzzed. This approach does something slightly different: all pixels that were previously in shadow are still fully in shadow. We’ve just added a penumbra of partially shaded pixels around them.

The upside is that they’re pretty and fast to compute, and that’s what I care about! There are three “rules” involved in computing them.

Rule 1: The closer a ray gets to intersecting a shape, the more its pixel should be shadowed. In the image below there are two similar rays (their distances to the shape pictured in yellow and green). We want the one that gets closer to touching the corner to be more shadowed. 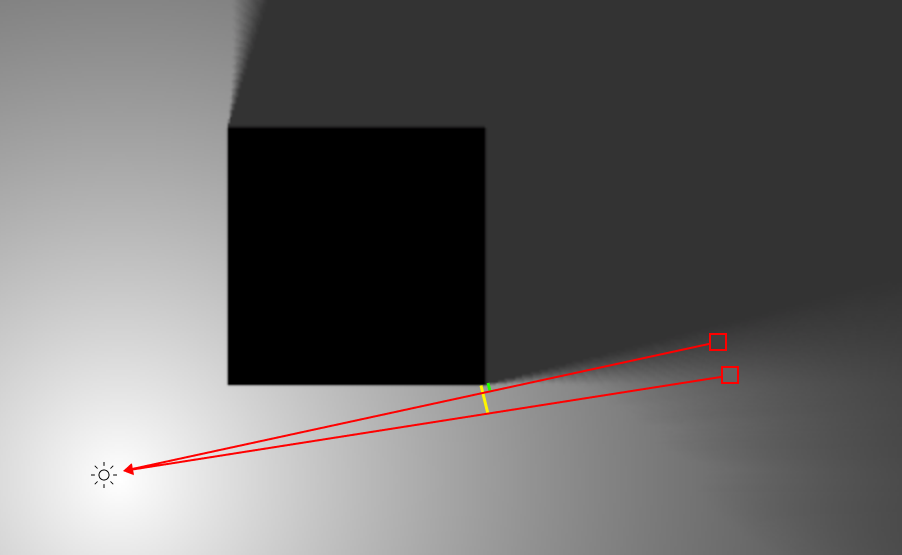 This is cheap to compute because the variable sceneDist tells us how far we are from the closest shape at each ray marching step. So the smallest value of sceneDist across all steps is a good approximation for the yellow and green lines in the image above.

Rule 2: if the pixel we’re shading is far from the point where it almost intersects a shape, we want the shadow to spread out more. 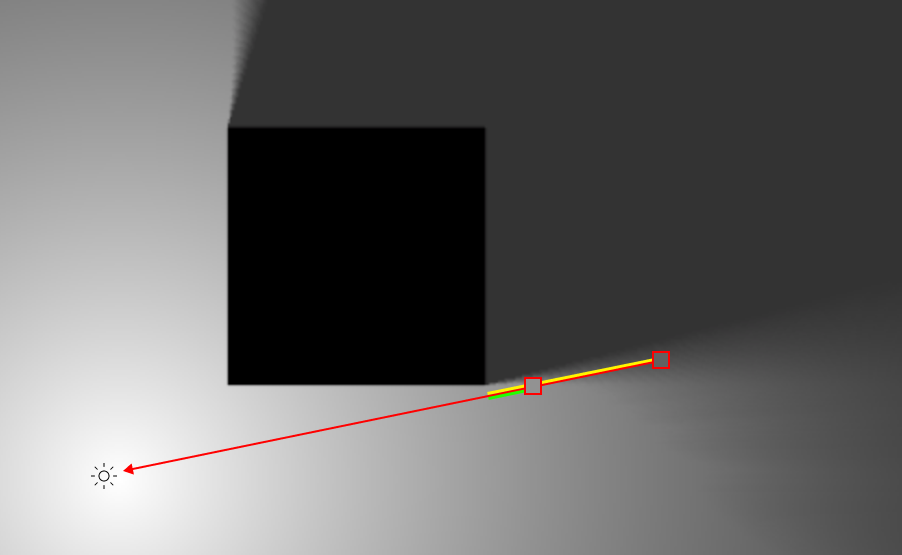 This is cheap to compute because the variable rayProgress is the length of the green and yellow lines in the image above.

So: we previously returned 1.0 for pixels that weren’t in shadow. To implement rules 1 and 2, we compute sceneDist / rayProgress on each ray marching step, keep track of its minimum value, and return that instead.

This ratio feels kind of magical to me because it doesn’t correspond to any physical value. So let’s build some intuition for it by thinking through why it might take on particular values…

And here’s a demo of what we have so far…

Rule #3 is the most straightforward one: light gets weaker the further you get from it.

Instead of returning the minimum value of sceneDist / rayProgress verbatim, we multiply it by a distanceFactor which is 1 right next to the light, 0 far away from it, and gets quadratically smaller as you move away from it.

All together, the code for the approach so far looks like this…

I forget where I found this soft-shadow technique, but I definitely didn’t invent it. Inigo Quilez has a great post on it where he talks about using it in 3D.

Inigo’s post also talks about a gotcha with this approach that you might have noticed in the demos above: it causes banding artifacts. This is because Rule 1 assumes that the smallest value of sceneDist across all steps is a good approximation for the distance from a ray to the scene. This is not always true because we sometimes take very few ray marching steps.

So in my demo I use an improved approximation that Inigo writes about in his post. I also use another trick that is more effective but less performant: instead of advancing by sceneDist on each ray marching step, I advance by something like sceneDist * randomJitter where randomJitter is between 0 and 1.

This improves the approximation because we’re adding more steps to our ray march. But we could do that by advancing by sceneDist * .3. The random jitter ensures that pixels next to each other don’t end up in the same band. This makes the result a little grainy which isn’t great. But I think looks better than banding… This is an aspect of the demo that I’m still not satisfied with, so if you have ideas for how to improve it please tell me!

Overall my demo has a few extra tweaks that I might write about in future but this is the core of it. Thanks for reading! If you have questions or comments, let me know on Twitter.

Thank you to Jessica Liu, Susan Wang, Matt Nichols and Kenrick Rilee for giving feedback on early drafts of this post! Also, if you enjoyed this post you might enjoy working with me at Figma!